Not One Line – from The Essential Doctor Who: Adventures in History 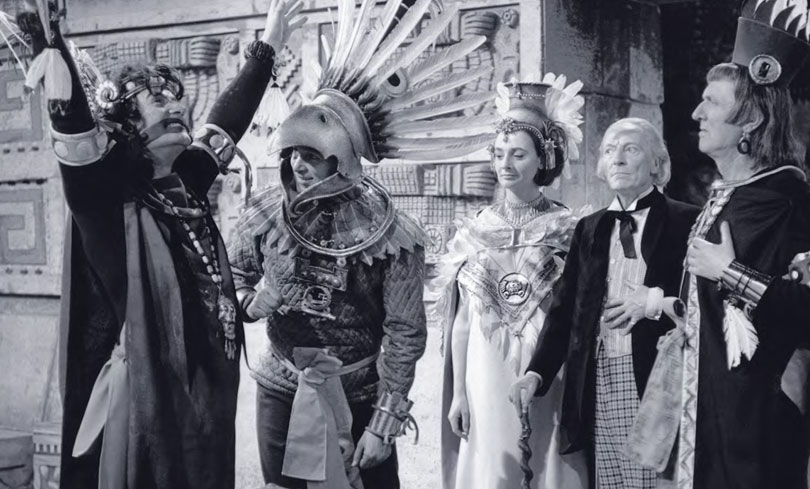 This was my first full-length feature for Panini’s range of Doctor Who publications, looking at the Doctor’s intervention in Earth’s history. Design by Peri Godbold.

There is a defining moment in The Temple of Evil, the first episode of The Aztecs (1964), when the Doctor (William Hartnell) warns history teacher Barbara Wright (Jacqueline Hill) about interfering in her own world’s barbaric past. “You can’t rewrite history,” he stresses. “Not one line!”

This wasn’t the TARDIS crew’s first trip back into Earth’s history, but this was its first real opportunity to intervene and make changes.

When Barbara is mistaken for the reincarnation of the god Yetaxa, she attempts to use her influence to abolish the Aztec ritual of human sacrifice. Her efforts come to nothing, but her argument with the Doctor allows him to explain his manifesto.

During the first series the Doctor was reluctant to cause as much as a ripple in Earth’s history, but these days he’s more than happy to drive a tank through a medieval castle. He still alludes to fixed points in time and is a stickler for the rules – but only when it suits him. So how does he know when to step in and when to sit it out?

By the time of The Aztecs the Doctor and his friends had already travelled to Cathay as part of Marco Polo’s caravan. They might have risked losing the TARDIS to Kublai Khan, but Marco Polo (1964) is more about them bonding against the backdrop of Marco’s epic journey than any attempt to change events.

At this point, the Doctor is something of a tourist, often learning about Earth’s history through his companions. In The Reign of Terror (1964) we discover from the Doctor’s granddaughter Susan (Carole Ann Ford) that the French Revolution is his favourite period of Earth history. He’s also quite knowledgeable about Roman aqueducts in The Romans (1965), but this might be down to the month he spent acclimatising in a villa after the TARDIS crashes.

It’s during this visit that the Doctor makes his first dent in history, accidentally toasting Nero’s drawings and unwittingly inspiring the burning of Rome. When Vicki points this out to him, he’s quite tickled. He’s even more relaxed about his influence on history when, soon after The Romans, he suggests the construction of a hollow wooden horse to the Greeks so he can stow away.

The Doctor’s invention of the Trojan Horse in The Myth Makers (1965) may have been prompted by the mischievous attitude of the Monk (Peter Butterworth), the opponent he first encountered in The Time Meddler (1965). The Monk’s playful nature concealed a careless desire to change history by handing anachronistic weaponry to Saxon villagers. The Monk’s plot to change the outcome of the Battle of Hastings is foiled, but thereafter the Doctor seemingly decides that a little judicious interference is no bad thing.

Although the Doctor’s attitude relaxes considerably, there are still occasions when he observes a strict adherence to established events. In The Massacre of St Bartholomew’s Eve (1966), for example, he sends Anne Chaplet (Annette Robertson) into certain danger, alienating an angry Steven Taylor (Peter Purves) by insisting that history can’t be rewritten. When they subsequently meet Dodo Chaplet (Jackie Lane) in present-day London, the implication is that Anne survived and that Dodo is her descendant. But Anne’s presumed demise remains an uncomfortable moment in the story – surely her chances of survival would have been higher had she stayed with the Doctor and Steven? Is there no wriggle room in the St Bartholomew’s Day death toll?

By contrast, in The Gunfighters (1966) – the next historical story – the Doctor seems fairly ignorant of the Old West and bluffs his way around Tombstone. His attempts to avert a shoot-out are chiefly to avoid bloodshed, as the murderous Clantons have mistaken him for their target, Doc Holliday (Anthony Jacobs). The skirmish goes ahead, with Dodo nearly caught in the crossfire, and the travellers leave without realising they’ve crashed the gunfight at the OK Corral.

Having left Anne behind in The Massacre of St Bartholomew’s Eve, the Second Doctor (Patrick Troughton) invites Jamie McCrimmon (Frazer Hines) on board the TARDIS straight from the battlefield of Culloden in The Highlanders (1966-67). Soon after, he basically adopts the nineteenth-century orphan Victoria Waterfeld (Deborah Watling) in The Evil of the Daleks (1967).

These actions must only add to his rap sheet when the Time Lords capture him in The War Games (1969), putting him on trial for his interference. Everything is history in the Time Lords’ eyes, and helping humanity fend off an Ice Warrior invasion in the future is as bad as burning Rome. More importantly, the Doctor gets a taste of his own medicine. It turns out that the rules he dictates in The Aztecs are actually the flouted laws of his own people.

After several years spent exiled on Earth, the Third Doctor (Jon Pertwee) is eventually pardoned, and he’s on his best behaviour in The Time Warrior (1973-74) when facing Linx (Kevin Lindsay), a Sontaran supplying weapons and a robot knight to a medieval robber baron.

The baggage of exile is shaken of by the rebellious Fourth Doctor (Tom Baker), who prefers to explore the universe, generally avoiding established events. He makes an exception to nip back to Renaissance Italy to tamper with canvasses that Leonardo da Vinci is about to use for additional Mona Lisas in City of Death (1979). This is time travel as a shortcut, designed to scupper a black market art sale by marking the fakes.

The Fifth Doctor (Peter Davison) is generally cautious about getting involved, but in The Visitation (1982) he starts the Great Fire of London, killing the Terileptils in the process. It’s an accident, but it’s clear his sneaking suspicion that the fire should be allowed to rage is more than just a hunch. Perhaps he’s been here already, or maybe he just does a lot of reading on the quiet.

Trips back in time for the next couple of Doctors skip the big headline events. The Sixth (Colin Baker) has a bit of business with Stevenson’s Rocket in The Mark of the Rani and meets a young HG Wells in Timelash (both 1985). When the Seventh (Sylvester McCoy) visits Gabriel Chase in Ghost Light and Maiden’s Point in The Curse of Fenric (both 1989) these are strategic trips to help his companion Ace (Sophie Aldred) come to terms with her own personal history. He settles an age-old grudge with Fenric while he’s at it.

The Doctor’s dealings with the Time Lords often define his attitude to getting involved in Earth’s history and things change drastically after the carnage of the Time War.

Believing himself the sole survivor of the conflict, the Ninth Doctor (Christopher Eccleston), with no-one left to pull him up on the rules, is both stricter and more cavalier than ever before. Those fixed points come up more regularly than ever, and in Father’s Day (2005) we see what happens now the Time Lords aren’t around to impose order. When Rose Tyler (Billie Piper) tries to prevent her late father from dying, time starts to unravel and the Reapers attack.

Maybe it’s here that we finally see what the Doctor was so afraid of in The Aztecs and The Massacre of St Bartholomew’s Eve – the universe essentially rejecting an altered course of events.

On the fipside, the Doctor loosens up more with each new incarnation, annoying Queen Victoria (Pauline Collins) and casually inspiring Shakespeare (Dean Lennox Kelly) with his own lines of verse.

It’s not until The Fires of Pompeii (2008) that his actions lead to tough choices. Donna Noble (Catherine Tate) begs the Tenth Doctor (David Tennant) to warn the people of Pompeii about the imminent eruption of Vesuvius but he refuses, citing a fixed event he’s ultimately responsible for – triggering Vesuvius himself to defeat the Pyroviles. However, Donna’s tears persuade him to rescue Caecillius (Peter Capaldi) and his family. It’s a decision that will have its own ripples.

The Eleventh Doctor (Matt Smith) takes a more spontaneous approach. He allows a distraught van Gogh (Tony Curran) a peek at his great legacy in Vincent and the Doctor (2010) and hijacks the TV broadcast of the first Moon landing to defeat the Silence in Day of the Moon (2011). He even winds up a bewildered Richard Nixon (Stuart Milligan) about the future events of Watergate and the notorious David Frost interview.

For all his swagger, this Doctor expends quite a lot of efort tidying up after the Silence and River Song (Alex Kingston) as his own timeline becomes more tangled, rebooting the universe and reluctantly saving Hitler from both River and the Tesselecta. River’s own intervention in his apparent death at Lake Silencio causes the timelines to collapse, requiring him to go to ground; the universe must think him dead to restore the balance.

The Curse of the Black Spot (2011) and Dinosaurs on a Spaceship (2012) both show how the Doctor bends the rules. The legend of the missing Captain Avery (Hugh Bonneville) is written because he’s off exploring the stars. The disappearance of Queen Nefertiti (Riann Steele) is down to her tagging along with the Doctor’s gang and settling down with Riddell (Rupert Graves) in twentieth-century Africa. A question mark over someone’s future seems to allow a little leeway, while a reported full stop doesn’t.

Perhaps this is what the Twelfth Doctor (Peter Capaldi) is thinking when he saves Viking teenager Ashildr (Maisie Williams) in The Girl Who Died (2015), turning her into an immortal. He now knows that his people survived the Time War and he’s recently agonised about whether he’s a good man. He also remembers Pompeii, and that he saves people. The rules quoted to Barbara in Mexico so long ago are forgotten and he goes with his hearts.

Allowing Ashildr to live has unforeseen consequences, such as the loss of Clara when Ashildr betrays the Doctor to the Time Lords. Now that his people are back, and in the Doctor’s bad books, who knows what mark he’ll make on history next? 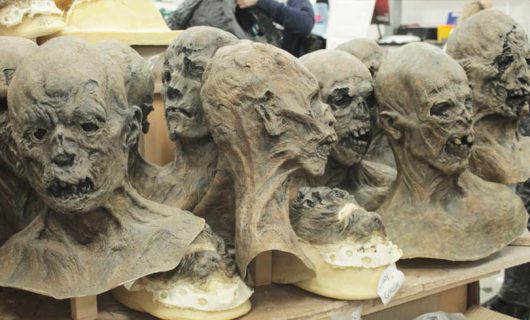 Monsters Inc – from Doctor Who Magazine 516

You can’t upgrade the universe if you’ve got a sweet tooth. So it’s a surprise to hear that Millennium FX […] 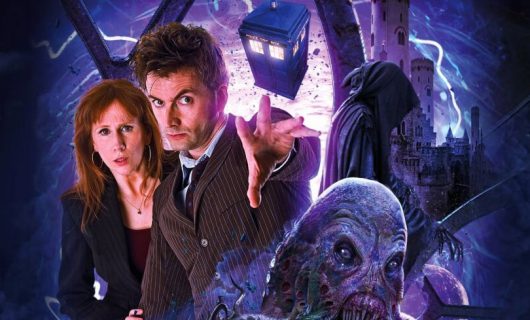 The DWM Review – from Doctor Who Magazine 502

The Tenth Doctor Adventures Vol. 1 It’s funny, isn’t it, running into friends that you haven’t heard from in a […]