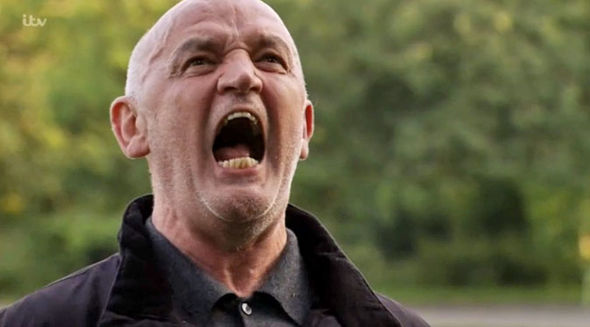 A confession. I am a backseat-driver viewer of Coronation Street. Having been in a relationship with a lifelong Corrie viewer for over four years, it’s definitely had an effect on my viewing habits. I enjoy Corrie, but I dip in and out, I’m best described as a passive viewer.

I’d never really watched Corrie much before 2013, but always enjoyed it when I did. Watching its very first episode repeated in 2010 for the show’s 50th anniversary, you could argue that it could have been written today, such is the enduring warmth and snap of Tony Warren’s writing. The great Paul Abbott described the monologues of Ena Sharples as “Like an Under Milk Wood performance rattled out by a gallant fishwife”, which sums it up nicely. It has a unique rhythm, pace, and feel. At its best, Corrie is magic.

Coming to it as a regular viewer in 2013, albeit one who frequently had to ask questions (“Why does Mary raise Dev’s children for him?” “And why does Dev speak so s-l-o-w-l-y?” “Why are you scowling at me?” “Is it all the questions?”), I settled into it pretty well. It wasn’t quite Tony Warren’s original concept, the Corrie of legend that people talked to me about – but over fifty years will do that to even the purest of visions, and its essence remained largely intact. The characters were likeable and funny. There seemed to be little need for the cartoon psychopath villains and unrelenting doom that EastEnders had become so desperately dependent on. But little did I know what was round the corner.

Mere months into my relationships with both Lesley and Corrie, dodgy Scouse builder Pat Phelan made his first appearance on the cobbles. Played with subdued menace by the excellent Connor McIntyre, Phelan quickly proved a memorable villain, a violent, malignant arch-manipulator, as dodgy as they come. Shortly after Phelan’s debut, he managed in short order to ruin a relationship between two regulars by scamming one, then extorting sexual favours from the other. He then quickly became a regular, and continued to explore new and interesting ways of being evil. At the time I naively thought that this was just a blip, not realising Corrie’s long history of bad apples, most recently a serial killer who used to be in Grange Hill. However, four years on, Corrie is now essentially The Phelan Show.

He’s certainly a charismatic villain, with the stone-faced visage of a hardened lifer, and seemingly the recuperative powers of a classic Universal Monster, having survived several attempts on his life and at least one fairly fatal-looking van crash, his eyes snapping open like that giant chicken from Family Guy each time.

The Phelan storyline has now been going on unabated for several years, with no sign of ending anytime soon, and everything else in the soap basically playing second fiddle to it. Other villains have come and gone in that time, and exited due to death or incarceration, whilst Phelan has been elevated to leading man. His ongoing storyline, which has gone through various incarnations (but not twists, because nothing he does is really that surprising) is basically this:

Phelan is implausibly evil, nobody notices. Anybody who does notice usually ends up either a) Dead. b) Locked in a basement. c) Leaving.

Almost everyone else on the street, especially the spectacularly slow on the uptake Eileen Grimshaw (who is now Mrs Phelan, and couldn’t be less aware of her hubby’s evil machinations if she lived in an isolation tank) remains oblivious to his scamming, manipulating, blackmailing, attacking, imprisoning, murdering ways. Phelan is so irredeemably evil that he even got dragged as a red herring suspect into the ‘Who pushed Ken Barlow down some stairs?’ storyline simply because it’s always him. He is the dark star that Corrie awkwardly circles. The parts of the show involving Phelan are like a low-rent crime thriller with flickering strip-lights, clanking chains, and a constant suggestion of the sort of violence they just can’t get away with pre-watershed. The rest of Corrie, including the more dramatic bits, is basically a different show bolted on.

Why exactly has this increasingly dark storyline been going on so long? Despite McIntyre’s charismatically villainous performance, it’s definitely outstayed its welcome. It’s not just the jarring and unnecessary darkness of the plot, but also the interminable length of it. TV may not have been in colour when the Phelan storyline started. Doomed animals were still being fired into orbit. Rationing was in full swing. John Logie Baird’s first TV transmission may have been of Phelan doing that smirking “I am evil and no-one has noticed” face he does.

The answer possibly lies with the competition. EastEnders and Corrie have been arch-rivals for decades. There’s a grudging respect between the two, but also a fierce competitive copycat streak, which has only grown with the weekly episode count. EastEnders is now five times a week, Corrie six. There are live episodes, miniature disaster movie episodes, horror-tinged murder plots… if one introduced unicorns, the other would quickly bring in a family of centaurs – who would clash with Shirley or Sally Metcalfe with hilarious results.

I was raised on EastEnders as my Mother was a fan. Even she struggles to watch it now. At its best it was good visceral stuff. At its worst, it was a preposterously overblown pantomime of misery, and it was fair game to affectionately take the piss out of its quirks and barking mad plots. In fact, at one point I briefly ran a blog affectionately taking the piss out of it, called Get Out Of My Pub! It was written from the point of view of an unseen extra, commenting on how absurd everything in Albert Square was, until EastEnders actually managed to ruin that by going way beyond parody. The ‘Who Killed Lucy Beale’ storyline (and its lengthy epilogue) did feature some fantastic acting from Adam Woodyatt and Laurie Brett, but it managed to do two unforgivable things. Firstly it pushed EastEnders headlong into a cycle of melodramatic storylines of such interminable length that any credibility gained by solid performances went out of the window. Secondly, and unforgivably, it totally knackered Get Out Of My Pub! At one point in the Lucy storyline, practically everyone in the cast was revealed to be up to something dodgy on the night she died. The main whodunnit storyline went on for around a year. The aftershocks were felt for almost another year. The aftershocks of the aftershocks went on for another six months or so.

The plot was eventually replaced by a long-running, and even more preposterous saga where Max Branning sought revenge for….well, stuff (I’d have to look up exactly what, there’s various things, all I know is he’s hopping mad), backed up by a shady (and wooden) organisation of evil recently revealed to be the family of James Willmott-Brown. Older viewers (I include myself in that, and even then it’s a distant memory) may recall that the vengeful Willmott-Brown went to prison for the rape of Kathy Beale in the late 1980s after Dirty Den burned down his pub in retaliation. To be charitable, Willmott-Brown’s reappearance is a plot twist that requires being at least forty to even understand who the villain of the piece is. Viewer reaction has certainly been fairly scathing. One of the more charitable comments about this storyline was Russell T. Davies’ recent, very apt summary “This is the worst story in the history of stories.”

This is the confused territory which soaps occupy now, which channel bosses are never going to say no to – keep the bums on seats with preposterous long game storylines, and keep upping the stakes, but particularly in the case of EastEnders, a growing reliance on bringing back characters not seen in decades to shore up the ratings. Corrie has remained largely immune to this. If anybody returns to Weatherfield, they’ve generally at least lived there within living memory. But even the meatiest storylines are all secondary to the interminable ongoing A-plot of PHELAN IS EVIL.

It’s not just soaps that suffer from long game plots and excavating previous events. Prestigious drama does the same, and doesn’t do it better. Familiarity breeds a desire for more, not to mention strong ratings. They call it Appointment TV these days. In the case of the BBC’s Doctor Foster, a five act reboot of Medea by playwright Mike Bartlett, it was originally written as a self-contained one-off, until its success prompted a second series of appointments booked with the popular GP. Without its original ‘Woman scorned’ hook, series two was a far harder pill to swallow, although in its defence it did at least conceal its climactic twist in plain sight.

ITV’s Broadchurch had more mixed fortunes over a definite beginning, middle, and end – albeit artificially extended from its standalone origins. Its gripping first series, a devastating meditation on grief and loss mixed with a classic whodunnit, worked brilliantly as a self-contained show, but was somewhat undermined by the inevitable sequel that followed when it proved a success. Broadchurch 2 saw the child killer of the first series protesting his innocence, and revisited events that viewers already knew the facts about, turning it into a court drama that not even the heavyweight ensemble cast could quite rescue. Once this clunky story autopsy was dispensed with, its third and final act was back on track with a new, equally emotive and disturbing storyline – the rape of Trish Winterman, before ending for good. This may well have been precipitated by showrunner Chris Chibnall’s pressing engagement with his new job at the helm of Doctor Who, but Broadchurch was a rare example of a successful show that actually came to an end. Considering ITV’s particular tendency to flog a series to death if the ratings are good, this showed remarkable restraint on their part. If the ratings remain strong, Jenna Coleman will still be in Victoria well into her dotage if ITV get their way.

Speaking of things that never end and also death, we come inevitably back to Phelan. His storyline in recent months has started to regurgitate older Phelan plot-strands like the death of Michael Rodwell, his property scam with Vinny, the increasingly Gollum-like ways of Andy Carver who Phelan kept locked up for months in a basement because…reasons. This briefly looked like it was all coming to a head over the suitably melodramatic backdrop of a dilapidated warehouse and the sort of driving rain only seen in the titles of The Incredible Hulk or on the Saturday night of a summer music festival. Was it finally reaching some form of logical conclusion?

Was it balls. The much-trumpeted Halloween episodes came and went with Phelan committing a double murder, continuing to defy the laws of soap (i.e. EVERYTHING HAS CONSEQUENCES), and surviving yet again. Christmas is coming. Is the end of his interminable saga finally coming too? It’s come to a head many, many times now. Surely now, as his vendetta against Anna Windass reaches something approaching full circle, the endgame must now be in sight?

It may never happen. In a hundred years time, when all TV has been replaced by a multi-platform streaming subscription service broadcasting directly to the skull, and all commercial TV advertising has been replaced by the involuntary urge to subconsciously order homewares, a photo-realistic, yet slightly glitchy hologram of Phelan may still stalk the neon cobbles of a Blade Runner-like Weatherfield, terrorising the descendants of the current cast, whilst they continue, somehow, to not notice that he is evil. 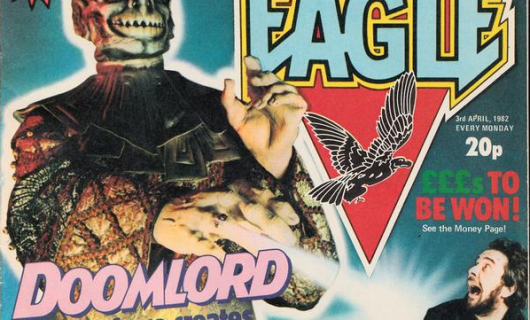 Looks Unfamiliar – I Made A Plasticine Harold Macmillan 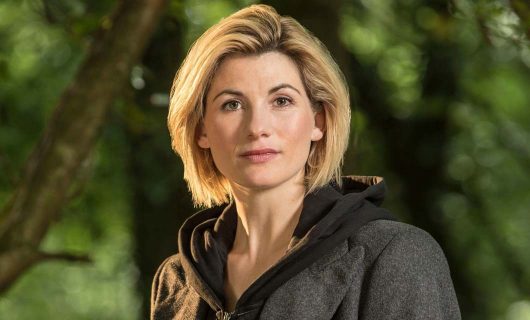 A recent post on We Are Cult looking at our newly gender-swapped time travelling hero.